Ontario Laws: Security Cameras In Public – What Are The Rules?

Ontario Laws Security Cameras In Public – Security cameras are becoming increasingly popular in public places. In 2018, it’s difficult to walk by any public place and not come across at least one surveillance camera in a store, parking lot, or walkway. However, as security cameras increase, so does the public’s fear that their privacy may be violated. In this article, we’ll look at the Ontario laws that govern public security cameras. Learning more about how these systems work and what is and is not allowed will help ease fears about public surveillance. Looking for more information about commercial or residential surveillance? Contact the experts at Jay360 now!

Ontario Laws Security Cameras In Public – What Are The Rules?

Though surveillance cameras may make some people uncomfortable, they are now a large part of public life. Since these cameras seem to be here to stay, it’s important to learn how they affect individuals and what the rules are surrounding them.

Summary Of Laws and Rules

Because individuals have a right to privacy, privacy laws in Canada require most organizations (with a few exceptions, such as covert video surveillance), to post a clear and understandable sign that individuals will be under surveillance if they enter the premises. It should be emphasized that the sign is to be located in an area where individuals can see it before entering the premises, so they can make an informed decision.

What Rights Do Individuals Have?

According to SurveillanceRights, Canadians also have a right to know?who?is watching them. That means the posted sign should also include information about who is operating the camera (for example, the retail store you are about to enter), contact information if you have questions about the purpose of the surveillance system.

Where Are Video Surveillance Cameras Allowed?

Surveillance cameras are?not?allowed to be positioned so that they can look through windows of another building. They are also not allowed to be able to pan, zoom, or tilt into areas not covered by the above definition. Surveillance cameras are?not?allowed in private spots in public, such as bathrooms, change rooms, or anywhere there is “a higher expectation of privacy” (Source: toronto.citynews.ca).

What Can The Recorded Video Be Used For?

According to?the Office of the Privacy Commissioner of Canada, “video surveillance should only be used for the purpose that surveillance is being undertaken, or for purposes that are permitted by law.”

For example, a surveillance system may be set up in an apartment’s parking lot. The cameras were set up to help keep tenants safe.

The video taken cannot be used to track and collect information about tenants, where they are going, what they are doing, etc. However, if a car is broken into or stolen, the video?can be used to provide information to the police (source).

What Are Surveillance Cameras Allowed To See?

These guidelines and more are in place to reduce?the amount of intrusion on an individual’s privacy. Still, in public areas without a reasonable expectation of privacy, surveillance cameras are allowed to see almost everything that occurs in that public space.

Who Gets To See What Is Recorded? 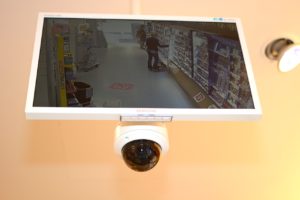 There are many strict rules about who gets to see what is recorded on surveillance cameras. Only “authorized personnel” are allowed to view the tapes when necessary.

Authorized personnel includes individuals such as police officers or public safety experts. The information collected on the tapes can only be used to detect or deter crime.

Each tape must also be filed and labelled, along with a log that records every person who has viewed the tape (and even how long they viewed the tape). Monitors that show captured video are supposed to be away from the public.

If you are concerned about your privacy and want to view a tape that has recorded you,?Section 47 of Ontario law and Section 36 of the Municipal Act gives individuals the right to their personal information if it has been collected by a security camera (as long as the information does not infringe on another individual’s right to privacy) – toronto.citynews.ca.

How Can You Spot Surveillance Cameras?

You shouldn’t have to go hunting for surveillance cameras – a clear, obvious sign that informs the public they are about to be under surveillance is required. Unfortunately, many companies and public spaces in Toronto have failed to set up proper signs. If that is the case, and you are worried about surveillance, don’t hesitate to ask a store manager if there are cameras around.

Most cameras are relatively easy to spot, as they are not supposed to be hidden and should only be placed in areas where the public does not have a reasonable expectation of privacy. However, keep in mind it should not be on the individual to seek out surveillance – individuals have the right to privacy and the presence of a camera should always be made known?before?an individual enters an area under surveillance.

What Video Surveillance Can I Set Up On My Own Property?

Bylaws that do govern residential surveillance cameras typically have rules about surveillance camera placement and laws against “excessive” fortification. For example, you can typically have a few security cameras around your property, but they must only be able to view your property – not even a tiny amount of your neighbour’s property should be visible on your cameras.

Unfortunately, not all areas have residential surveillance laws right now. If your region does not have camera bylaws, there are general tips to help prevent accidental invasion of privacy and neighbour conflict:

Interested in adding your own security camera to your home? Jay360 looks at helping you position your security system not only for an optimized security profile but also for bylaw compliance!

Ensure you have the right tools for the job when safeguarding your premise with the right security advisor for peace of mind and privacy.

Rely on the knowledge and experience of Jay 360 to provide?you with the best?home security solutions. Digital or analog, we have you covered. We will recommend only the security products that meet your specific needs and budget.